The edited collection Video Games and Comedy has just been published by Palgrave Macmillan in Comedy series. It was edited by Krista Bonnello Rutter Giappone, Tomasz Z. Majkowski, and myself. The cover was created by Luis E. Blackaller.

You can find the book HERE.

The official book description:
Video Games and Comedy is the first edited volume to explore the intersections between comedy and video games. This pioneering book collects chapters from a diverse group of scholars, covering a wide range of approaches and examining the relationship between video games, humor, and comedy from many different angles. The first section of the book includes chapters that engage with theories of comedy and humor, adapting them to the specifics of the video game medium. The second section explores humor in the contexts, cultures, and communities that give rise to and spring up around video games, focusing on phenomena such as in-jokes, player self-reflexivity, and player/fan creativity. The third section offers case studies of individual games or game series, exploring the use of irony as well as sexual and racial humor in video games. 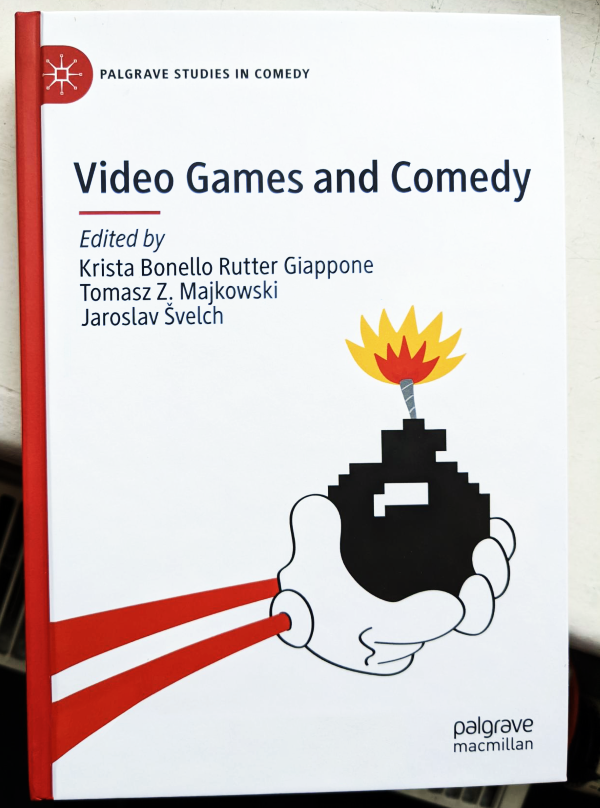 Scaffolding and How to Fall Off It: Theories and Concepts

Comedy and the Dual Position of the Player by Nele Van de Mosselaer
Press X to Punch(line): The Design and Cognition of Interactive Gags by Dooley Murphy
The Rubber Chicken’s Ergodicity: On Puzzle Punchlines in The Secret of Monkey Island by Daniel Heßler
On Nintendo’s Visual Humour: Slapstick Cinema and Comic Theatre in Super Smash Bros by Manuel Garin
Benign Trials, Vexing Violations: Reading Humour in Puzzle Games by Wyatt Moss-Wellington, Paul Martin

Clowning Around: Contexts, Cultures, and Communities

The Illuminatus Space Game: From an April Fools’ Joke to Digital Cultural Heritage by Petri Saarikoski, Antti Lindfors, Jaakko Suominen, Markku Reunanen
Red Comrades Save the Galaxy: Early Russian Adventure Games and the Tradition of Anecdote by Alesha Serada
“Sorry, You Had Won”: Satirical French Digital Games Responding to National Sociopolitical Crisis (1984–1986) by Filip Jankowski
Making Fun of Tetris: Humour in Parodies of a Computer Game Classic by Sebastian Möring
Ridiculing the Player: Live-Action Visualisations of Game Experience in YouTube Parody Videos as an Ambivalent Strategy of Self-Fashioning by Agata Zarzycka
Emergence and Ephemerality of Humour During Live Coverage of Large-Scale eSports Events by Mateusz Felczak

Cybernetic Irony: Racial Humour from Mecha-Hitler to Nuclear Gandhi by Darshana Jayemanne, Cameron Kunzelman
“Mark Matthews Stars in ‘Anatomy is Hard!’ A Struggling Student Tries to Make the Grade with His Professor”: Sexual Humour and Queer Space in Coming Out on Top by Samuel Poirier-Poulin
“A Tool of Efficiency and Consumption to Destroy Man”: Irony and Sincerity in Travis Strikes Again: No More Heroes by Rory K. Summerley
Humour in Pornographic Browser Games: From Undertale to Uddertale, a Case Study by Caroline Bem
That Joke Isn’t Funny Anymore (Or Is It?): On Hitman and Gamer Humour(lessness) by Rob Gallagher

0 Comments on Video Games and Comedy