Monster diary #2: Monsters of my youth

As I promised last time, I am going to write a bit about my personal encounters with video game monsters. A part of my project is empirical research into how players experience and interact with in-game monsters. A logical preparatory step would then be to introspect. In today’s post, I will try to remember some of the monsters from the 1980s and early 1990s that stuck with me for various reasons – and to see which facets of ludic monstrosity they point to. I will not follow canonical examples, because, after all, my gaming experience was far from canonical.

The first digital games I played (also the first games with automated opponents that I played) were text-based action titles for the CP/M operating system. I would visit my dad’s work (the Solo match factory) and play them when one of the East German Robotron machines was unoccupied. Catchum was a clone of Pac-Man, and Ladder was a variation on Donkey Kong, both written by California-based Yahoo Software (who have nothing to do with today’s Yahoo). In both titles, all in-game action was represented by ASCII characters. Thus a Pac-Man/Catchum ghost was an “A”. Though my recollections are understandably hazy, I don’t remember ascribing any particular fictional identity to those “A” letters, and I was not familiar with Pac-Man. So I was literally running away from A’s and occasionally devouring them when they become M’s. (Unfortunately, I cannot find the code of the game anywhere to see if the A’s behaved like Pacman ghosts.) In Ladder, you are meant to jump over or otherwise avoid O’s that are moving towards you.

Not knowing Donkey Kong at the time, I had no idea these could have represented barrels. In fact, I don’t remember thinking they represented anything at all. They were just moving O’s. Today, I’d say they were just tendrils of the game’s algorithms, unburdened by representational duties. They came in infinite quantities, always re-generating or “respawning”. This shows how problematic the issue of representation monsters – there is a thin line between moving obstacles and animate creatures in video game worlds, and the cues to tell one from another are representational or contextual.

(You can play a freeware Java version of Ladder here.).

I’ve recently written an encyclopedia entry on Manic Miner for the 100 Greatest Video Game Franchises book. It’s a 1983 British 8-bit platformer in which you, according to the game’s instructions, “must collect all the flashing keys in the room while avoiding nasties like POISONOUS PANSIES and SPIDERS and SLIME and worst of all, MANIC MINING ROBOTS.”
I used to play this game a lot and I found out to observe the very trivial behavior of the “nasties” and time my movement to avoid them. The game is noted for its inventive visual designs and humor. But besides killer lavatories, there is one iconic monster (or “critter” as they were called by the press back them) already in the very first level. It’s a wind-up creature that guards one of the platforms – the first monster that teaches you to handle the rest.
There’s a simple collision detection mechanism – once you touch it, you die. It’s also a monster that shows that all of them follow pre-defined, predictable routes, like toys wound up by the game developer. In fact, speaking of video game monsters as robots seems to make a lot of sense.

In about 1992-1993, I have moved to playing on the IBM PC. At that time, dungeon crawlers were a huge thing, even among twelve-year-old kids. We often had no idea how exactly to play these games, because we used pirate copies without manuals. But we did know that once you kill a “screamer” in Dungeon Master, it will dissolve into “screamer slices”, which you can store and eat later. Characters in Dungeon Master had to eat and drink, creating a lot of tension and a need for smart resource management. In a way, it was a precursor to today’s survival games. Killing the respawning screamers was a bit like hunting.

It might seem like a chore, but there was something very physical and satisfying about slashing these plant monsters and retrieving juicy-looking food from them (perhaps also due to the game’s solid interface feedback). For me, the Screamer drives home the point of eliminating monsters to gain in-game resources. It also highlights the joyful experience of agency that one experiences when hacking and slashing.

Another favorite computer role-playing game of mine, with bafflingly complex mechanics and a large variety of creatures. The game itself is not based on any particular pen and paper RPG system, although it was marketed as a “fantasy role-playing simulation”. Being a role-playing simulation, it uses third-person narration to a great effect. It also attempts to simulate the pen and paper role-playing game experience of encountering a monster but not knowing what it really is. In Wizardry VII, this gets even more complicated, because there are more species of one class of monsters that look completely identical, as they are represented by the same sprite. As the manual puts it:

You may therefore encounter a flock of black birds, and these may be just simple Ravens or much stronger Vampire Vultures. You may encounter a tentacle thing, but you don’t know if its an Alliphoot or a Dandiphoot.You may encounter a demon, and it may be a simple Fiero or a formidable Yreguoth, or any other of the six varieties, each of which has different strengths and weaknesses. Initially, the game shows the genus name (Black bird, Phoot or Demon), and only if you cast a particular spell or have enough points in the mythology skill, you may find out what exactly you are dealing with. 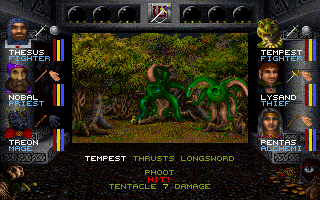 Despite the fact that monsters remain coded into the game’s databases, this gives them an initial air of mystery. It also creates funny situations when you encounter extremely strong opponents who look deceptively regular.
I will continue another time with more contemporary and more canonical cases. I believe that looking at video game monsters historically can reveal a lot about current monster tropes.

0 Comments on Monster diary #2: Monsters of my youth